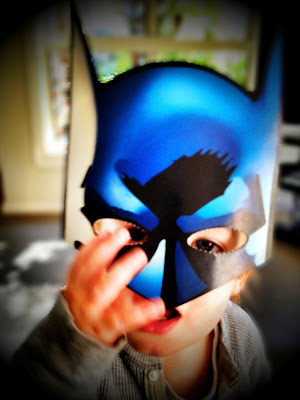 This morning my 2 yr old grandson, Knoxie, came to me and asked for my help.
He was trying to put a mask on his face. Knoxie's toybox has all manner of superhero masks, but this wasn't one of them. This morning Knox had found a different kind of mask to wear.

It was one of those masks you are given on aeroplanes to help you sleep. He had the right idea about placing this mask across his face, but he just couldn't manage to get the elastic bands over his forehead and positioned around the back of his head.
So I bent down and helped out.
"There you go!" I said as I stood up.
Knoxie turned around, poised to walk off down the hall.
"You can't walk around with that on Knoxie," I said, You'll bump into something."
"No, Nanny", was his response as he set off down the hall.

It came as no surprise that about 5 seconds later I heard - THUMP!
Followed by -  "WAHhhhh...."
The Masked Crusader had hit the wall.
I found him sitting on the floor in tears, still masked. I picked him up, hugged him and repeated my earlier advice, "Knoxie, you can't walk around with that mask on. You'll bump into something."
Taking the mask off his poor little head, I put him down on the floor and looked at the egg that had appeared on his forehead.
Still sniffling, he took the mask out of my hand and attempted to put it back on, once again asking my help.
So I obliged, repeating the same warning, with added emphasis.
"Now don't walk around Knoxie or you'll bump into something again."
"No Nanny," came the reply, again.
Off he went. Before I could stop him he tripped over the pram which was lying in the hall.
And this time he cried even louder. One of those I'm seriously hurt  cries. I went over and picked him up. My poor little masked crusader cried like his heart would break. He buried his little face (still masked) into my neck and sobbed.
I felt his pain.
Tears welled up in my own eyes ... but I'm rather ashamed to say at this point that the tears flowing from my eyes were not the result of empathy. Rather they were caused by a desperate attempt to stifle an incredibly irresistible urge to laugh hysterically.
Heartless grandmother.
I removed the mask and examined the damage. Not only did Knoxie have an egg on his forehead, he now had one across his eyebrow to match. And a cut on his eyelid.
We went to the freezer, I got some ice, put it in a cloth and applied it to his eye. We then sat on the lounge while he calmed down and watched the end of Playschool.
After a few minutes, deciding  that eating the ice was a better option than holding it on his head, he jumped down from my lap and set off, maskless, to play something else.

So funny, yet so sad.
Knoxie wanted so badly to wear that mask and to do all the things the masked action heroes do in the cartoons his big brothers watch on TV.
He just didn't understand what I understood. And he decided not to heed my advice.
He couldn't see the relationship between being masked and the pain which he was bound to experience in the very near future. His lack of experience and understanding created a lack of foresight. He was setting himself up for failure. His noble intentions to save the world were thwarted by his failure to listen to sound advice! Twice.

Knoxie, the Masked Crusader, reminded me later in the day of how easy it is for me to be lacking in foresight. It's possible for me to make wrong choices in life simply through lack of knowledge and experience. It's possible to ignore warnings or advice because my desire to reach that goal, to fulfil that dream is more important to me than the preparation of the foundations that will be needed to support it, or of my understanding of the cost involved. How dangerous is it to wander through life wearing a mask of ignorance!

I'm blessed to have wise friends and family members who are willing to impart into my life from their wealth of experience and knowledge.
But what's an even more important source of wisdom to me is the Word of God, the Bible. This provides both the foundation and the framework for every aspect of my life. I'm committed to studying it continually so that I don't make the same mistake Knoxie did -  bumping my way through life sustaining unnecessary injuries.
I want to be able to see clearly as I move forward on my crusade through life to save the world! 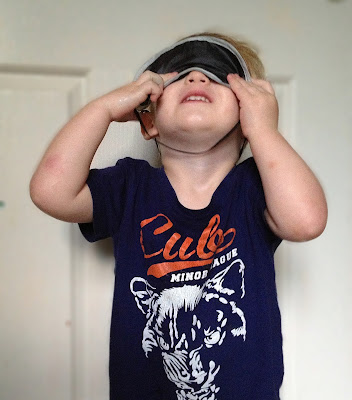 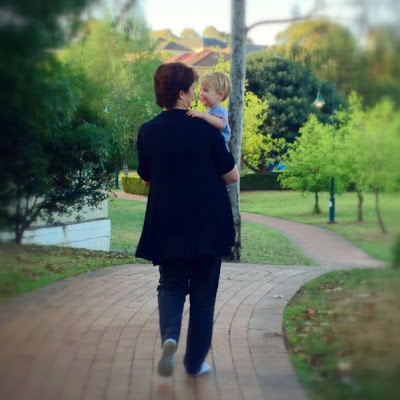 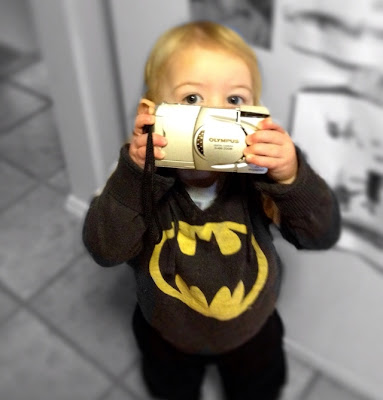