Easter On My Mind 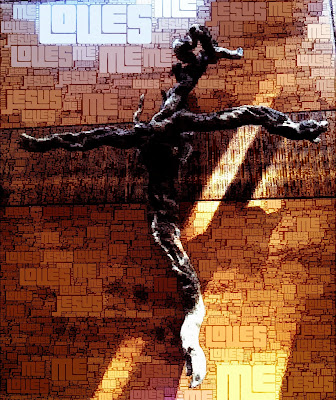 Here's something I wrote with Easter on my mind . . .

LORD OF ALL, LORD OF ONES

He stopped amidst the swirling, stifling, suffocating crowd.
“Who touched me?”
The woman trembled, bloodied, afraid.
She knelt before the Lord of Ones and whispered her confession.
And He, who would one day Himself be bloodied
for Ones such as this said,
“Be healed.”

He slept through the storm as they crossed the Lake,
While the Madman waited in turmoil amongst the tombs.
Naked, too strong for chains and irons, yet hopelessly bound,
He ran and fell at the feet of the Lord of Ones.
And He who would one day be bound in the place
of Ones such as this said,
“Be free.”

He sat and watched the Rich and Powerful throw in their coins.
The Widow came, unnoticed, yet seen.
She gave out of her poverty two small coins of infinite value.
“She gave her all,” mused the Lord of Ones.
And He who left the wealth of Heaven in order to give His all
for Ones such as this said,
“Be blessed.”

He stood alone as the crowd hurriedly dispersed.
“Unclean!” they reviled, and hissed and cowered.
The Leper knelt before the Lord of Ones and pleaded, “If you are willing..”
And He who would soon be defiled by the sins
of Ones such as this,
Reached out and touched, and said,
“Be clean.”

I wait, speck in an ocean, grain of sand on a beach,
Bloodied, bound, impoverished, unclean.
Overcome by His Presence, overwhelmed by His Grace, “I come to worship,” I whisper.
And the Lord of Ones who died in my place embraces me,
And draws me in,
And in words that echo across time and eternity whispers back,
“We are one.”